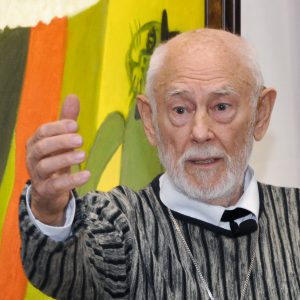 Gleb Mikhailovich Vyatkin was born on May 30, 1934 in Perm in the family of the sculptor and painter Mikhail Aleksandrovich Vyatkin.

In 1955, Gleb Vyatkin graduated from the Perm Musical College with a degree in violin, then he performed as a violinist in various chamber ensembles. In 1961, he entered the monumental department of the Leningrad Mukhina Art and Industrial High School, successfully completes his studies in 1966 and returns to his hometown. Over the next two years, Gleb Vyatkin creates a number of monumental works in Perm and the cities of the Perm region – sgraffito on the facade of the Perm Regional Library, sgraffito in the Uralochka restaurant, a mosaic on the facade of a cinema in the city of Krasnokamsk and a number of other works. The modernist works of the young artist did not find understanding among the leadership of the Perm branch of the Union of Artists and in search of a more lively creative environment in 1968 Gleb Vyatkin moved to Volgograd.

In Volgograd, Gleb Vyatkin also faces rejection of his work by the leadership of the regional branch of the Union of Artists. Over the next twenty years, he receives only a few minor contracts for monumental works in Volgograd, and the artist’s paintings and drawings are not accepted to any of the official exhibitions of the Union of Artists and are not exhibited publicly. During this period, in collaboration with other artists, Gleb Vyatkin works on monumental objects in the Moscow region, Izhevsk, Kazan, Syzran and other cities, continues to paint and draw, studies Eastern philosophy, Zen Buddhism and yoga, travels to the Central Asian republics of the USSR . Many paintings of this period have been lost, some of them were destroyed by the author himself.

In 1976, Gleb Vyatkin met with the Italian artist Ernesto Treccani in Volgograd. After this meeting, Treccani wrote the following in his diary:

Portrait of Gleb. I met Gleb when I was in Soviet Russia. Gleb is an artist-philosopher, a bit of a magician. Playing the violin. Serious Master. Committed to freedom between people and in painting. His art is monumental. More physical than schematic. Excellent engraver. Painter of a wide palette. Friend of Italy. Citizen of the world.

Gleb Vyatkin receives an invitation from Ernesto Treccani to pay a creative visit to Italy. This trip took place in 1977 and became for the artist a “meeting with himself.”

In the following years, Gleb Vyatkin created a large number of works of various genres and wrote the first of his Quartets, large paintings with various interpretations of a single plot, which Gleb Vyatkin would repeatedly refer to in the future.

The works of Gleb Vyatkin arouse great interest among the foreign public and are warmly received by foreign colleagues and critics. However, the first personal exhibition of Gleb Vyatkin in the USSR took place only in 1989, when the artist was already 55 years old. This show was held in the exhibition hall of the Volgograd Union of Artists and caused a deep misunderstanding not only among the administrators of the Union of Artists, but also among the majority of the public. The recognition of the artist abroad during these years contrasted sharply with the complete rejection of his work at home.

In 1990, Gleb Vyatkin’s works were included in the 50 Years of Soviet Art expositions in Barcelona and Madrid. Vyatkin’s works were put by the curators of the exhibition on a par with the works of Kandinsky, Larionov, Drevin, Rodchenko, Lentulov, Falk, Andronov, Yegorshina, Lubennikov and other most significant artists of the Soviet era. In the same year, Gleb Vyatkin received an invitation to take part in the art project “Murales a Cibiana-di-Cadore” in Italy, where he created the mural “Motherhood” (“Signora della Cime”) received a special award, and the artist himself – the status of an honorary citizen of the commune of Cibiana di Cadore.

After 1991, Gleb Vyatkin finally finds recognition in Russia. The artist participates in more than a hundred exhibitions – both in Russia and abroad – in Italy, Germany, Great Britain, Spain and the USA. In the late 1990s and early 2000s, Gleb Vyatkin created his most significant works: “Pilgrim”, “Susanna and the Elders”, “Venus and Cupid”, “Lovers”, “Big Nude”, “Halley’s Comet” and several variants of his “Quartet”. In 2009, Gleb Vyatkin wrote the biblical cycle “The Passion of the Lord”: “The Kiss of Judas”, “The Scourging”, and “Carrying the Cross”.

In the 2000s, large-scale retrospective exhibitions of the artist are held, the artist’s works are exhibited at international art auctions and included in museum and private collections. Gleb Vyatkin was actively engaged in painting until his death at the age of 87 on March 28, 2021.

Show more
All rights reserved in accordance with Art. 1259 of the Civil Codex of the Russian Federation and international law. Any redistribution or reproduction of part or all of the content of this page is prohibited.