Stas Azarov. Not Foma, not Jaremtschuk

So, the great job of the artist Stanislav Azarov and the art critic Lyubov Yakhontova is done – the exhibition “Stas Azarov. Not Foma. Not Yaremchuk” is open, and the album of the same name has been published. That happens.

This exposition project had a long history and an exciting pre-history. Or rather, two separate pre-histories / backgrounds that took place in parallel and finally converged at one point – here and now, at this exhibition.

There was an artist named Stanislav Azarov in the first prehistory. This artist drew strange pictures, was fascinated by the combination of the most complex printing techniques, participated in numerous exhibitions in Russia and abroad (with great success), gained fame in increasingly expanding circles of art critics and collectors, traveled, arranged performances, conducted master classes. This prehistory began somewhere in the late 90s, as an objective date and place of “beginning” we can take, for example, the works of Azarov, presented at the 11th Biennale Internationale Petit Format de Papier at the Musee du Petit Format (Virianval, Belgium). 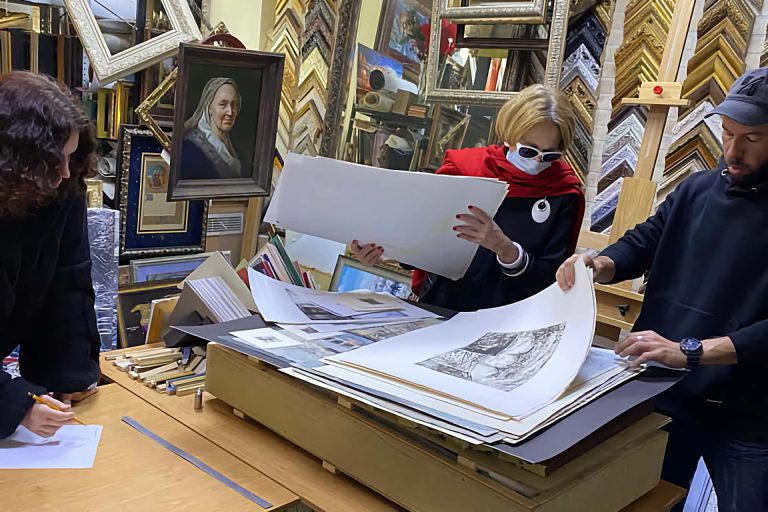 Lyubov Yakhontova and Stanislav Azarov. Preparing for the exhibition.

There was also an artist named Foma Jaremtchuk in the second prehistory – tortured by Soviet punitive psychiatry and an unrecognized genius who drew strange pictures on scraps of paper and medical tests. And this happened in the USSR, somewhere in the 50-60s. After Foma Jaremtchuk’s death, his works were kept by the attending psychiatrist (psychiatrists tend to collect the creativity of their patients), and many years later all artworks were acquired by an entrepreneur named Alex Hess.

Realizing the scale of the cultural property in their hands, the art curators of this German gallery immediately organized an exhibition. Then – the second exhibition, then – the third. The works of Foma Jaremtchuk has earned a well-deserved success, his works appeared at major art auctions with subsequent inclusion in the museums and private collections. Several more art dealers joined the topic “Foma Jaremtchuk“, catalogs and even a serious monograph by an Australian art critic were published. All editions – in excellent printing quality. 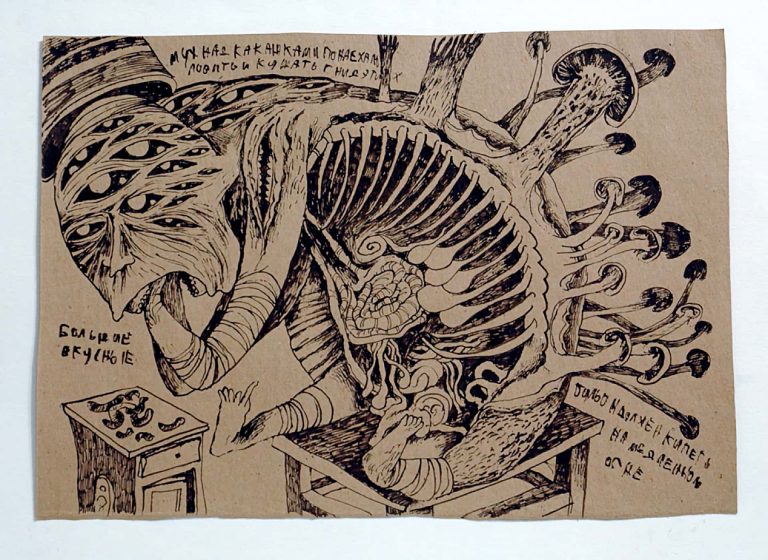 The story of Foma Jaremtchuk‘s posthum success would have continued even now if the passionate about the ousider art young scientist Mikhail Yashnov and the journalist Yulia Vishnevetskaya did not search for traces of this remarkable artist in his homeland — in Russia. Mikhail and Yulia tried to find Russian archival records about Foma, but found nothing. They talked to Russian experts in the field of outsider art, but they had not heard anything about such an artist. Why has none of the connoisseurs of Soviet outsider art ever heard of the existence of Foma? It’s impossible!

It turned out that it was possible. But only if there was never any Foma Jaremtchuk. The original of the fascinating investigation by Mikhail Yasnov and Yulia Vishnevetskaya was published in the Internet Magazine that cannot be mentioned in Russia now because of censorship. We will refer to articles in The Telegraph and Antiques and the Arts Weekly, we can indicate here without unexpected consequences.

In short – in the early 2000s, Alex Hess accidentally acquired for a small sum from the little-known artist Stanislav Azarov a whole box of sketches, scraps and fragments of installations. After that, “Foma Jaremtchuk” was invented – a kind of collective image of the “victim artist”, exactly corresponded to the expectations of European gallery owners working with outsider art and who know how to sell it. No “Foma” ever existed, and when Mikhail and Yulia found Stanislav Azarov’s work online, everything fell into place.

Stanislav was sincerely surprised to learn about the successful posthumous career of his fictional avatar, as well as the very fact of his existence, with undisguised interest, he flipped through all the albums with his works (but under a false name), and made a public statement.

It would seem that the story of Foma Jaremtchuk should end there. But in order for this to really happen, we had to organize this public exhibition.

After the journalistic investigation by Mikhail Yashnov and Yulia Vishnevetskaya, we were faced with the fact that a number of art historians, art critics and collectors (both in Russia and abroad) were not ready to accept the fact that no Foma ever existed. We listened to many opinions and there were even suggestions that Stas Azarov studied at the works of Foma or painted “in the style of Jaremtchuk“. Recognition of the real state of affairs was blocked by the established personal brand “Foma Jaremtchuk” and (of course) by the amount of money invested in this name.

On the initiative of Nikolai Malygin, our foundation has done a lot of work with various galleries where the works of “Foma Jaremtchuk” have been exhibited in recent years, with art market specialists and art dealers – for recognition of real authorship. Art critic Lyubov Yakhontova has prepared a retrospective exhibition, presents the works of Stanislav Azarov from the 90s of the last century to the present day. We made it obvious, that Stanislav’s characteristic works of the early period were created long before such a phenomenon as the “Foma Jaremtchuk” appeared in the Cologne gallery and aroused explosive interest among specialists.

We invite you to visit this exhibition from October 23 to November 22, 2020 in the exhibition hall of the Volgograd Mashkov Museum of Fine Arts. 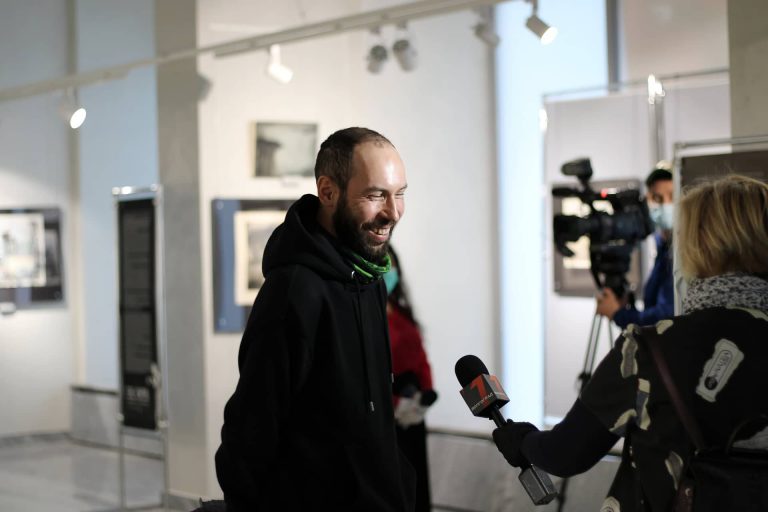 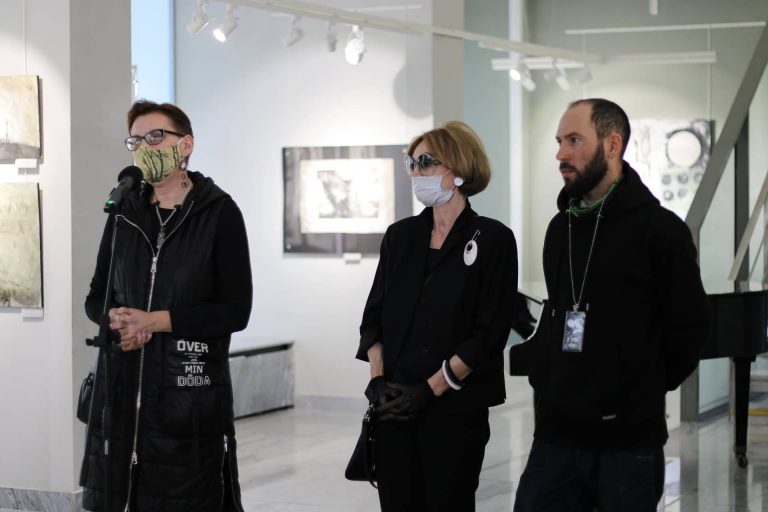 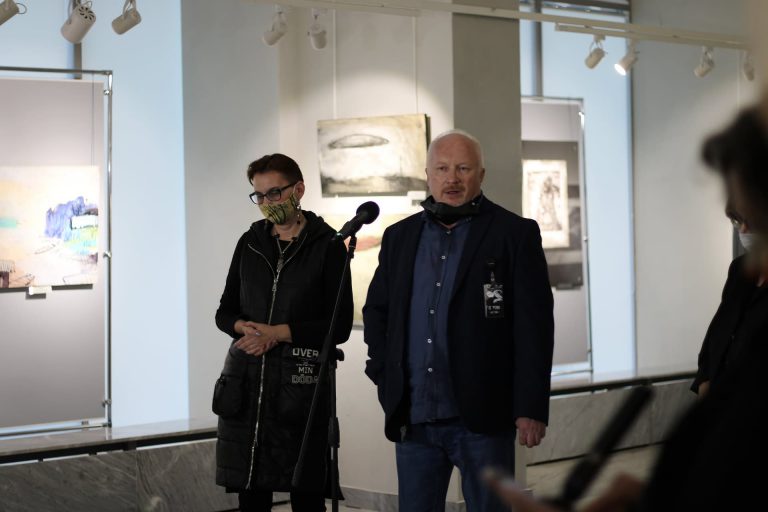 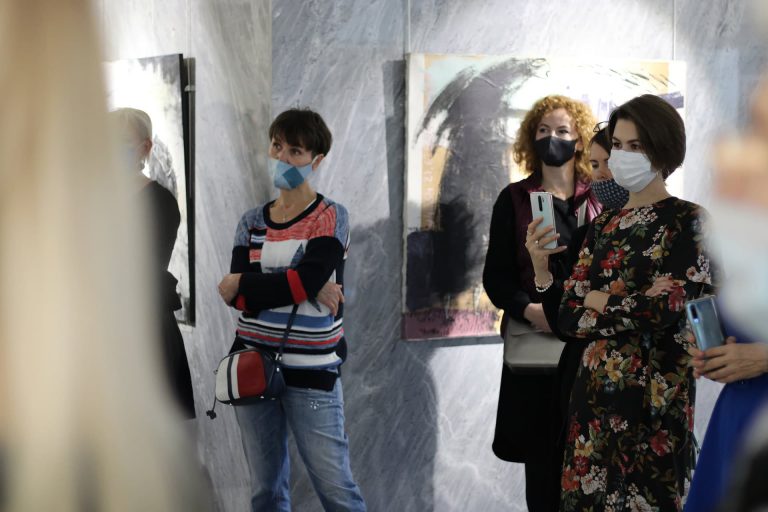 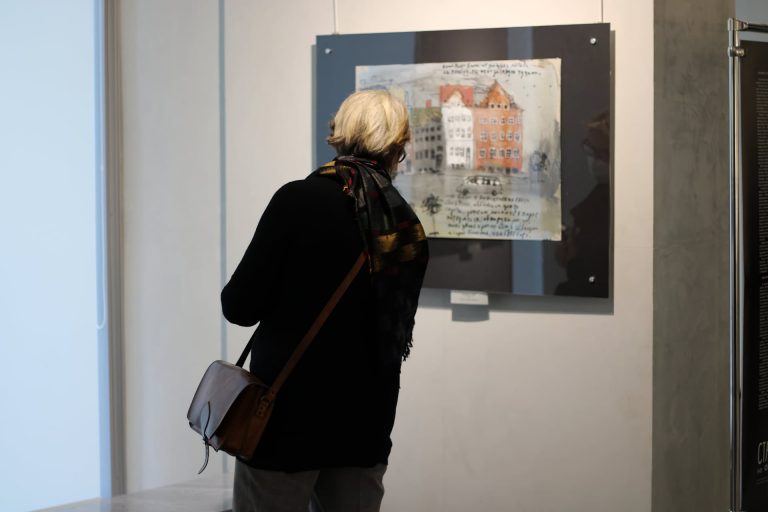 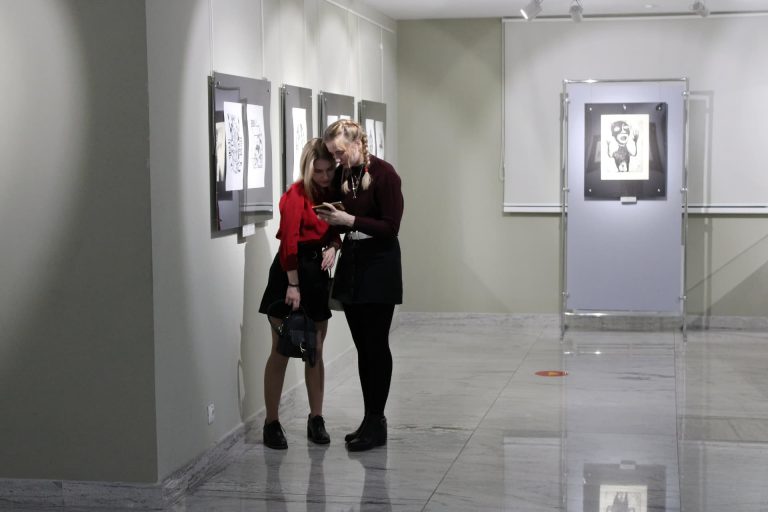 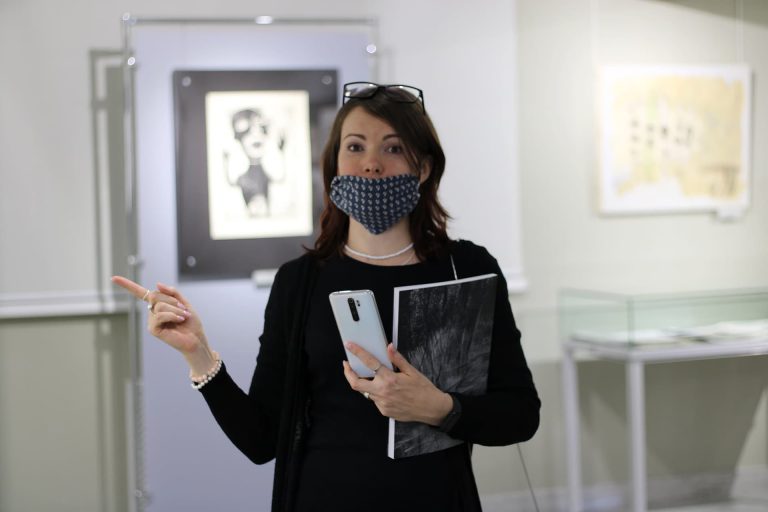 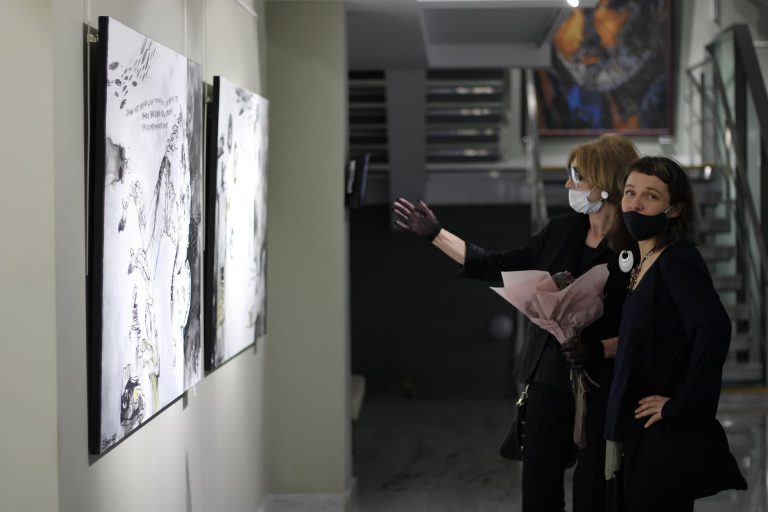 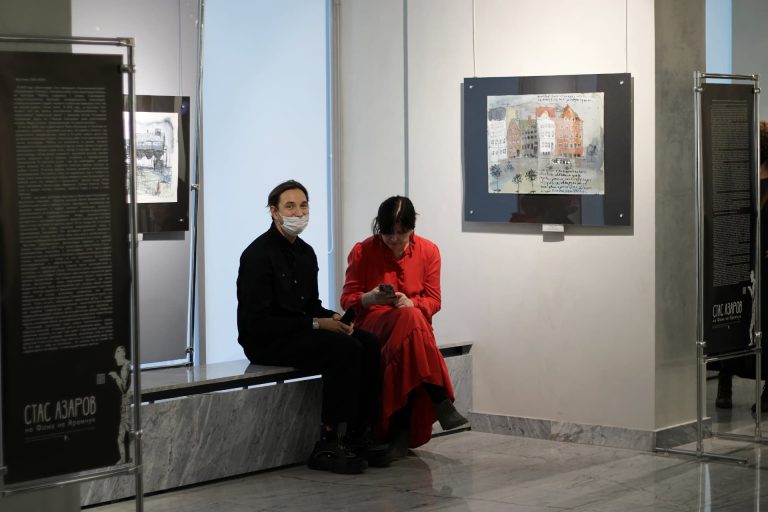 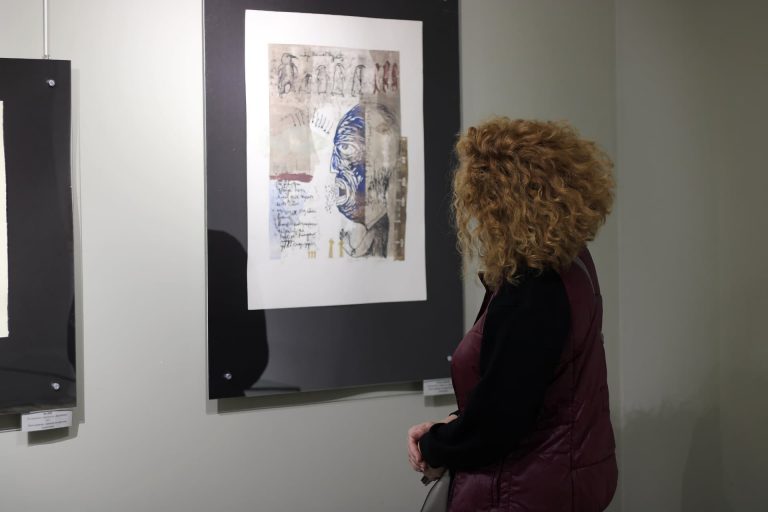 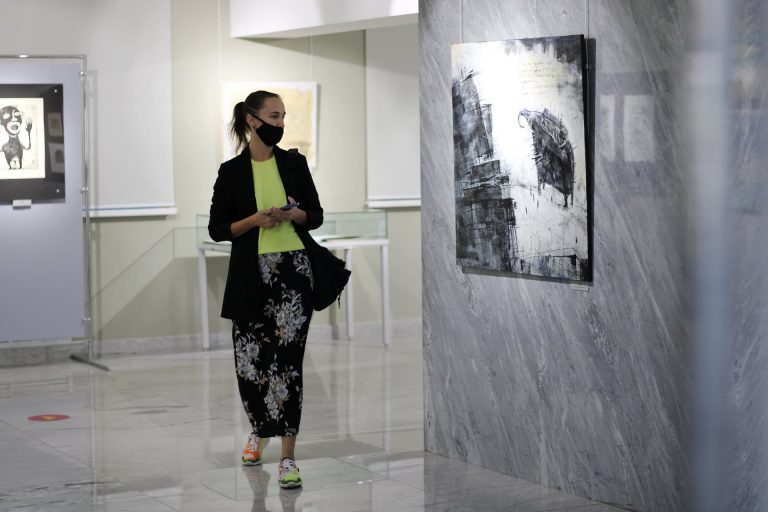 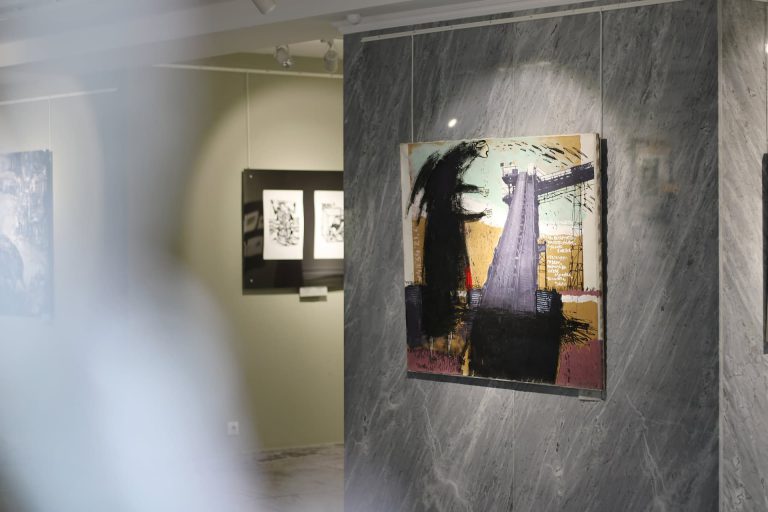 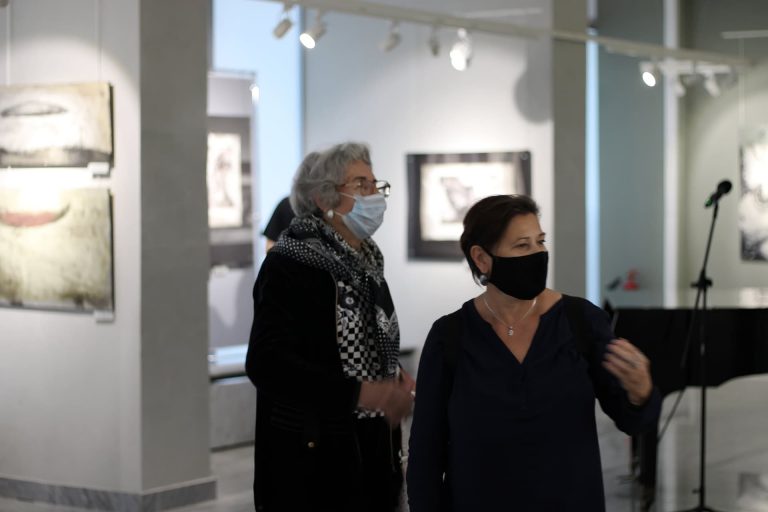 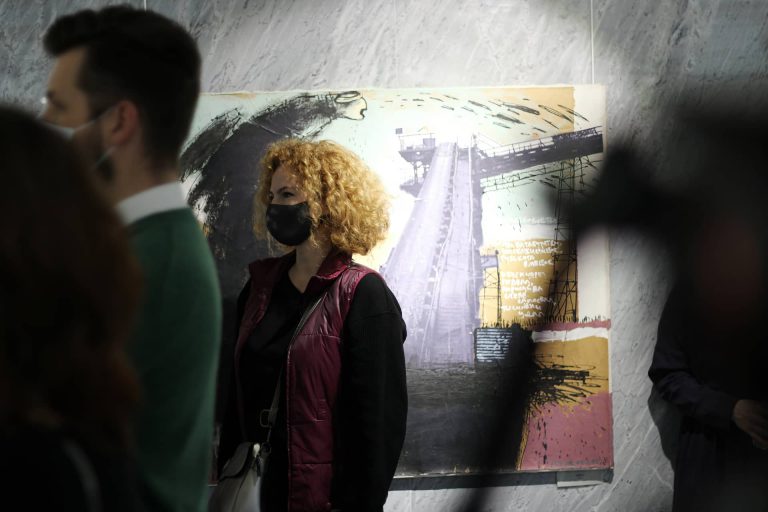 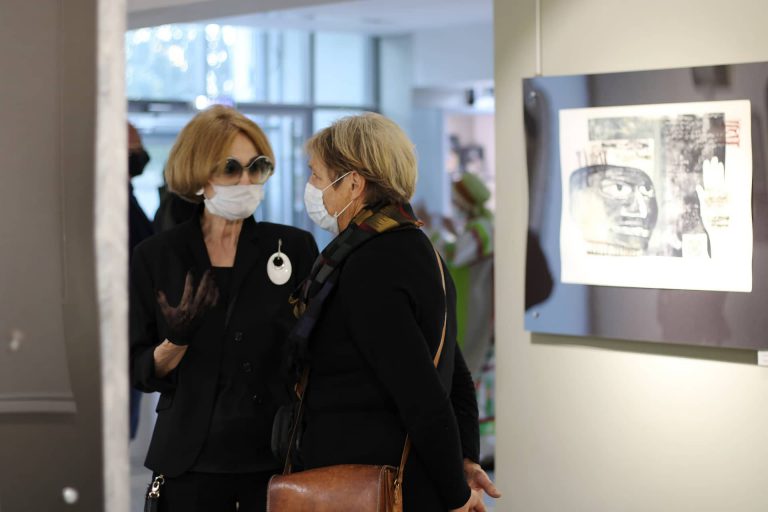 More about this exhibition
Stas Azarov's Kamyshin Plein-AirsExhibition Opening at the Nikolsky Cathedral
Petr Zverkhovsky R.I.P.[1942 - 2020]
Photos: Mitya Zimin, Elena Pilipenko, Anna Vasilevskaya.
Except where otherwise noted, content on this page (including text, images and other media) is licenced under a Creative Commons Attribution-NonCommercial-NoDerivatives 4.0 International (CC BY-NC-ND 4.0). You may not use the material for commercial purposes. You can copy and redistribute this content in any medium or format under the following terms: (a) you must give appropriate credit, and (b) provide a link to the license. Remix, transform, or build upon this content for any purpose and in any form is prohibited. No warranties are given. The license may not give you all of the permissions necessary for your intended use.